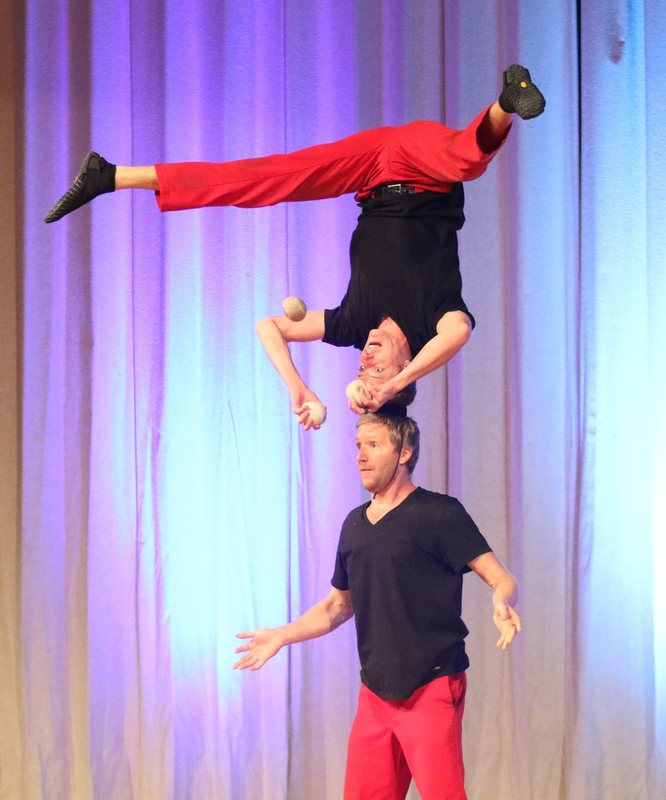 One by one, the rings left Jonah Greenhouse’s hand. They cut the air, and rushed towards the ground a split second later. Greenhouse picked each one out of the air with the confidence of a professional while the hypnotized audience watched on. As the violin and piano soundtrack reached a crescendo and all the seven rings came to rest on his palms, the audience broke into thunderous applause, finally letting go of the breath they didn’t know they were holding in.

The Circus Show was organized by MIT Student Juggling Club as a part of their three-day long JuggleMIT weekend juggling arts festival. Perhaps because of that, a large part of the audience seemed to be connected to juggling. The same set of audience also created a relaxed atmosphere at the event, where they clapped and cheered as the performers pushed their limits, and took it with good humor when those endeavours resulted in a mistimed catch and a dropped ball.

The heart of the show was definitely the two-part performance by the Red Trouser Show, the cheery duo with perfect acrobatic and a cheery air of showmanship. They opened with a show of their more conversational “warm-up” acrobatics and two-person balancing acts. On the second half, they followed with a choreographed set that was put together like a magic show and executed with perfect synchronization.

The emcee, Cate Great, was a performer herself, and everyone’s heart couldn’t but skip a beat during her balancing acts. She balanced on a plank of successively higher stack of rolla bollas. Each time she increased the height and decreased the stability of the whole structure, it acted as a shot of adrenaline for the audience; by the time she got to her final act with five of the rolla bollas, all of Kresge had reached pin-drop silence, waiting only to see her get back on solid ground safely, and bursting into applause when she did so.

It’s also impossible to not mention Susan Voyticky’s seemingly physics-defying act. With perfect grace and balance, she spun around on the stage of Kresge in her Cyr wheel. The non-trivial physics of the wheel made her act even more enchanting. Voyticky captured the audience’s hearts and minds with the successive execution of each of her well-choreographed moves and no extra effort.

Although the other performers were obviously very bright, their performances fell short of the incredibly high bar set by the aforementioned performers. Matan Presberg was either trying out a new set, or having a bad day, as he kept missing his catches on every round despite being one of world’s top 40 jugglers at this moment. However, as Abigail Anderson, ’18, from the audience quipped, he was juggling many more things than most MIT students. Alex the Jester’s siphoning act was quite remarkable, but everything else left something more to be expected.

The complete JuggleMIT festival was sponsored by Association of Student Activities Large Event Fund, the Student Activities Office, the DeFlorez Fund for Humor, and the Council for the Arts at MIT. With an air of casual humor coupled with an unmistakeable dexterity, it was certainly a reflection of the Institute spirit on a Saturday night.