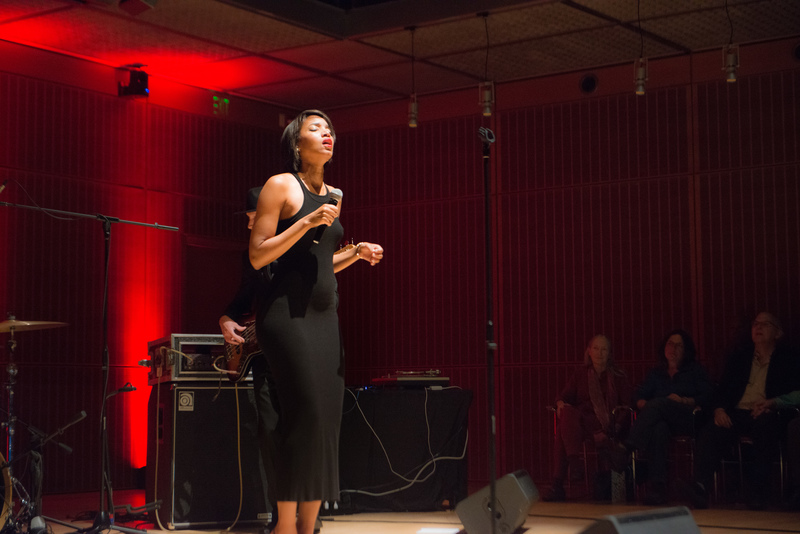 Her voice rose like a whistle, rushing up and down through the gallery, before it rested into a rich, steady pitch. She was restless, though; and she looked as if she was searching for something. Only when she smiled a bit, turned, and without the mic delivered a note as high and strong as the ones with the mic, the playful twinkle in her eyes settled into a look of satisfaction of a performance well delivered.

This vivacity and childish playfulness is what sets Alice Smith apart from her contemporaries. Where others may focus on the music, Alice delivers a whole performance not only with her bold and rich voice, but also with her frisky swings, like tiny dance steps, synchronized with every one of her notes.

Alice Smith was not the only performer that night; the event was also brought to life by the opening act of Cedric Jackson II. Cedric, a local musician hailing from Boston’s very own Berklee College of Music. He displayed every bit of strength as can be expected from an upcoming star. His songs created an interesting juxtaposition of blues and soul, pop and rap. The ease with which he switched between those can only make you wonder about his true strength, until you realize his true strength lies in being adept at all of these simultaneously. His songs also held a signature of authenticity; every song he delivered held something new, something previously untasted. If you, like me, don’t hold the boundary between pop and rap as sacred, chances are high you will enjoy his music.

As the acts transitioned, the emcees of the night got the crowd on their feet, quite literally, by staging an impromptu dance break. DJ of the night, DJ L’Duke (fka LeahV), was prepared and continued her stream of bright, bass tracks. The Isabella Stewart Gardner Museum’s Calderwood Hall allows for an exquisite performance experience. Four rows are stacked directly atop one another in a 40-by-40 foot cube and the room feels both contained and expansive at once. When the entire room was swaying and bouncing to music just before Alice Smith took the stage, it was hard to imagine a better use of the space. Of course, once Alice Smith started performing, the greatest benefit of the structure was evident; every member of the audience was able to look upon her performance with incredible intimacy.

Alice Smith was introduced as “Nia Simone meets Tina Turner,” so expectations for her live performance were high. Yet, it was impossible to observe the way she so effortlessly emoted through her words and actions and be disappointed. Even as she sung alongside her band of an electric guitarist, a bassist, and a drummer, her voice was the strongest instrument of the night.

Her experience was clear; no one watching was more comfortable than she was on stage, but she made it easy for the room to have fun. The entire experience had people swaying in their seats and her band beaming. She had utmost control over her voice, singing in a whisper when it was pertinent or belting melismatic notes in quick progression with a wide smile on her face. She used both pitch and volume changes to her advantage, amazing the room with stunning crescendos. She closed the night reminding us of how she so seamlessly blends genre, by minimizing accompaniment and presenting us with what we had been waiting for the whole night: just her voice.

Most of the selection was off her album She, released in 2013; however, she treated us to the title track of her upcoming album, Mystery. Although she is not currently on tour, we are all eagerly anticipating her new release and hope to catch her live again thereafter.