A dead god, blind god, smart god, and angry man all walk into a planet... 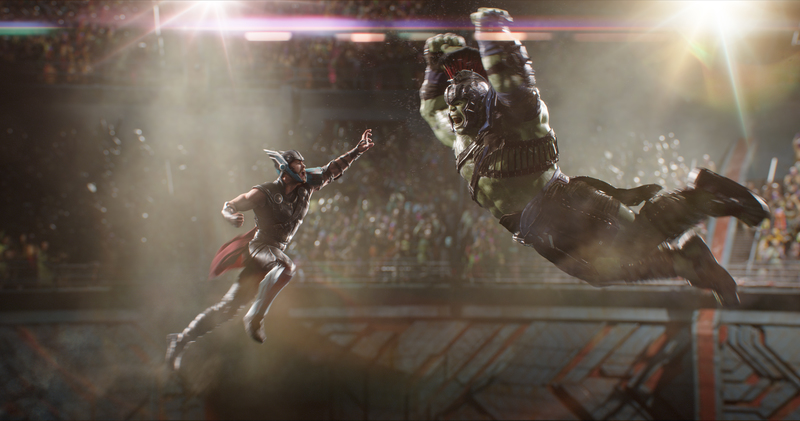 If there is one thing you can take home from Thor: Ragnarok, it’s this: identity crisis is not unique to human beings. Sometimes, gods suffer from it as well. Even with such a simple motif, Thor: Ragnarok sets itself apart from the first big-budget action-adventure of this fall by reinventing the Thor formula quite elegantly.

Thor: Ragnarok’s greatest virtue is that it is a disposable movie in the Marvel cinematic universe. For casual moviegoers, that means you can just watch the next movie in the series without worrying about missing out on something big. That also means that this movie demands to be judged on the pure entertainment value it provides. With an engaging plot and quirky humor that only Marvel can bring to the table, Thor: Ragnarok does it quite well.

One major complaint I have about the plot is the lack of development in Hela’s (Cate Blanchett) character. As the first primary female antagonist in the recent Marvel lineup, her character had a lot of possible ground to explore. Unfortunately, Thor: Ragnarok falls short, and instead creates an antagonist that is mostly 2.5-dimensional. Even with two major female characters, it also doesn’t pass the Bechdel test. Instead, the movie wastes time half-developing Skurge, Hela’s sidekick, in a painfully predictable side plot.

One way this movie stood out from the bulk of action-adventures of this decade is via it’s soundtracks. Thor: Ragnarok abandons the oft-beaten path of pairing battle scenes with uplifting orchestral scores. Instead, it complements its major battle scenes with classic rock ’n’ roll in the form of “Immigrant Song” by Led Zeppelin. The references to Norse mythologies in the song adds Easter eggs for those recognizing the music. Overall, the soundtrack followed the ’70s theme with synth-pop scores strewn all over it. The soundtrack contributed further to a lightening of the mood — it feels as if the battles are just video game fights with nothing too serious at stake.

Even though the soundtrack complements the fight scenes quite nicely, the fights are a treat to your eyes in their own merit. The mass battle scenes, especially Thor versus Surtur’s minions, Hela versus the Asgardian army, and the final battle against the undead army, have all been choreographed to quite a singular, smooth flow. Although some of the one-on-one fight scenes leave a little more to be expected (I’m looking at you, Loki versus Valkyrie), they are all superseded by the all-out gladiator battle between Hulk and Thor. To be fair, it does belong in Planet Hulk more, but what are Marvel movies good for if these small transgressions aren’t allowed? Especially enjoyable throughout the whole movie was Thor’s “God of Thunder” moments in battles. Forcing Thor into a fighting style with swords and shields, which is quite unconventional for him, brings out some previously unexplored truly golden moments in Thor battle scenes.

Throughout the movie, Chris Hemsworth does an exceptional job playing the lead. Beginning with a light, comedic start, he seems like an older, more matured version of Tom Holland’s Spiderman. From there, his transformation into the ruler of Asgard seems natural and appropriately heroic. Both Tom Hiddlestone and Mark Ruffalo leave their marks with the audience through their half-comedic but powerful acting as Loki and Bruce Banner respectively. Finally, Jeff Goldbaum rises above the limits set by his sinister but comic role as the Grandmaster, and comes off as an antagonist to be reckoned with.

An overlay of quirky humor is probably the biggest difference between Thor: Ragnarok and previous Thor movies. From the first scene, with Thor swinging on the chain, until the very last one, comic relief never leaves the movie for more than five minutes. Unfortunately, sometimes that also exudes a try-hard vibe. When a $180 million-budget movie spends five minutes making jokes about the “Devil’s Anus,” it feels really shaky and forced.

The director Taika Waititi did a excellent job depicting each scene for the viewer to feel as if they were in the scene. The camera angle for each battle scene in particular was interesting without leading to obscurity or disorienting camera jumps. However, when a director designs a movie, do they design it for 3D or 2D? Viewing Thor: Ragnarok in 3D didn’t take anything away from the film, but it also doesn’t add any mind-bending effects or scenes that you absolutely need to see. So if you are thinking about watching Thor attempt to save the day on the big screen, save those few extra bucks and don’t get the 3D viewing.

Speaking of mind-bending effects, the CGI effects in this movie were parallel to those of any Marvel movie: incredibly good. It certainly seemed that Hela could pull swords out of thin air and the Devil’s Anus really spat fire and debris. It wasn’t as impressive as, say, the Rogue One space battle, but many of the scenes didn’t need that kind of impressive effects.

If you’re trying to decide whether you should go watch Thor: Ragnarok — if you want a stimulating plot or breathtaking acting, this movie might not be for you. But, if you want a few fun hours with a movie chock-full of action and simple jokes that makes you laugh, Thor: Ragnarok will definitely not disappoint.