The brutalist beauty of ‘Obsidian Tear’ 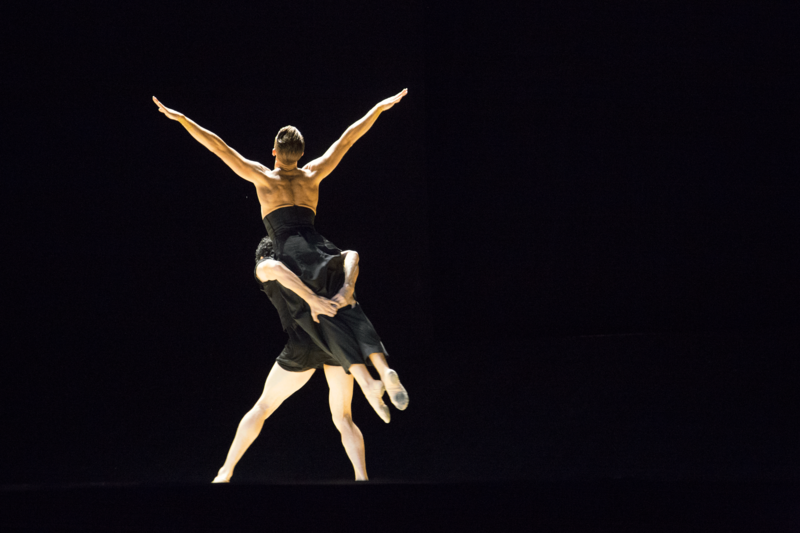 This isn’t your typical ballet.

You get this feeling as soon as you hear the sound of feet hitting the ground. The dance isn’t noticeably different yet, but the lack of music in the background makes it more physical. It takes away the illusion of weightlessness or effortlessness. Then come nine performers, all of them male. All of them are also dressed in a strange spectrum between dresses and trousers. As their powerful, yet gracefully executed moves pull you into this strange, new world, you also start picking up the story. This time, the dance isn’t about beauty. This time, the dance is about jealousy and anger — it’s a brutalist spin on the classic formula of ballet.

So starts Boston Ballet’s Obsidian Tear, the newest show in their Fall lineup. It is a three-piece performance, starting with Finlandia, an orchestral piece, followed up by performances of Obsidian Tear, and ending Fifth Symphony of Jean Sibelius.

Obsidian Tear breaks many expectations from ballets in an astonishing way. It starts from the very beginning, when two dancers dressed in black and red come in with their frantic arm movements without moving their cores or legs as much. This expands into a group of nine, with eight dressed in black to highlight the idea of an outlier. They continue their artistic arm work, with occasional impressive leg lifts. Sprinkled throughout the whole performance are some traditional dance moves, but they are more random, with strong arm movements. There isn’t much unified action among the dancers either. Instead, the performers dance frequently in small groups with repeated themes, like three-people groups with a lift repeated at intervals at different locations on the stage.

The creative stagecraft complements the dance well. This creativity manifests in the long tilted portion at the back of the stage leading up to a glowing red abyss or in the use of grey marley and harsh white lights from above which made the dancers glow as well. You can tell that the choreographer was also the set designer by the way that the two are intertwined. The choreography uses the set not as a crutch (as is often the case), but as a vital but simple part of the storytelling and the dance. With the central characters in the dance throwing themselves into the abyss, the choreographer closes the loop and puts you face-to-face with beauty bathed in that eerie red light that resembles human anguish too closely.

Obsidian Tear is followed up by the world premiere show of Fifth Symphony of Jean Sibelius, a more traditional piece with a little excessive use of symmetry. Like Obsidian Tear, this dance also contains an outlier, but this time she is in a much milder role. Usually, there is a couple dancing in the front and corps dancing in the back. But too much use of the same formula almost makes it look like he is ashamed of the corps, so he puts them in the background reluctantly. In the same canons, Fifth Symphony has too much going on — and that makes it look messy sometimes. It also repeatedly uses many lines of dancers, which has the unintentional effect of having misaligned arms or legs. Teamwork flourishes in other sections of the dance and creates lots of beautiful lines in movements, both between partners and sometimes across the stage. Quite a few times, the corp joins a couple’s pas de deux, when they perform one or two related moves in unison, at some heightened moment in music. That happens only occasionally, though — more often the groups are juxtaposing each other’s movements. A solid kudos must also go to Ashley Ellis because of her exceedingly amazing pas de deux that shone through this group work.