The million bright sides of life 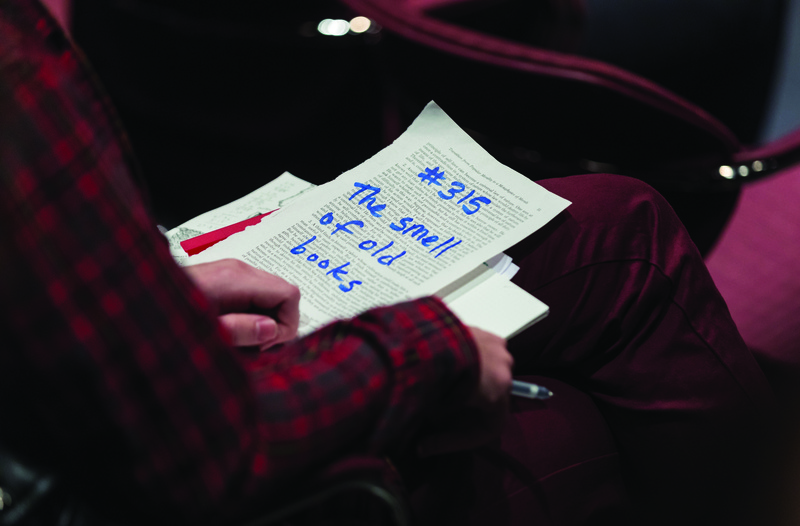 We didn’t know how to write this.

We were still in shock after leaving the cozy, arena-style theatre for the imposing wideness of Tremont Street. We’d just watched Every Brilliant Thing, a one-woman show written in England by Duncan Macmillan and brought to Boston by SpeakEasy Stage Company. The show follows the journey of a Narrator (Adrianne Krstansky), whose mother’s depression and attempted suicides inspire her to create a giant list of every brilliant thing in life.

Of course, “watched” is not the proper term to describe how we interacted with the play. “One-woman show” is also inaccurate — though Krstansky was the only actress on the bill, the spotlight shone on the audience, too. Most of us had lines to read, hand-written on unique scraps of paper. Some members of the audience were called on to improvise, taking on various roles that included the Narrator’s father, teacher, and even husband. Often, Krstansky asked audience members for props or apologized when she bumped into someone as she meandered around the bleachers. She sang aloud, and we laughed, as if she was an old, excitable friend, recounting a good story. In the end, we didn’t “watch” Every Brilliant Thing as much as we experienced it.

And it’s hard to express the quality of an experience that’s so personal when the whole play is filled with so many wonderful things. The lighting was natural but pleasant. Not a single moment in the the performance felt overdramatic. Before the show began, we were approached by a cheerful woman with a basket who asked us if we wanted to participate in the show. We were to read an item off of the list of brilliant things when its number was called (ours was #23: Spiderman). After the show ended, amicable ushers directed us to a bulletin board, where we could leave our own brilliant thing on a brightly-colored sticky note.

We could go on and on, collecting every detail that made Every Brilliant Thing so enjoyable, but we can’t describe just how meaningful it was or convey the exact loveliness of Macmillan’s script and Krstansky’s delivery.

And maybe that’s the point of all of it, of the Narrator’s own experience with life and her list of brilliant things. At times, she finds herself capable of collecting thousands of things that give her pleasure — at others, she struggles to think of even one. But sometimes, adding to the list isn’t what matters, and the Narrator feels comforted just reading it. She thinks that there is value to life, that there are moments worth powering through the bad times for, and that is not something she is always able to persuade others to believe. But she can hope, and she does. This play excels in making the whole piece look so natural — as if it were truly lifted off of someone’s life and set into a stage.

We have seen many tragedies and comedies, but Every Brilliant Thing is a play that frames a tragedy through a comedic lens by integrating Krstansky’s outstanding acting with Macmillan’s unbridled optimism.