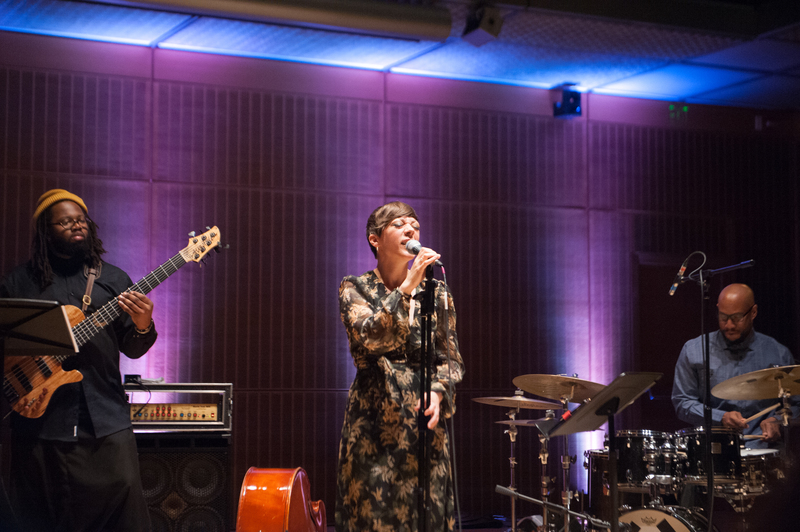 The first feature of Calderwood hall at the Isabella Gardner museum that you will notice is that it’s a perfect cube with a ground-level stage and seatings on four sides of almost all four stories. Such an unusual architecture manages to fit a decent number of people without losing the feeling of intimacy. The excellent sound crew reinforces this feeling by offering you a nearly acoustic experience.

On our tour to the hall for the RISE concert featuring Gretchen Parlato and Mirella Costa on the evening of April 26, this sense of intimacy was as strong as the joy from music alone. The sense fit perfectly for the opening act by the Brazilian singer Mirella Costa. Her joyful performance reminded us of a warm, crackling campfire on a summer night, or a hearth in an inn somewhere in South America. She was brilliantly accompanied by a jazz trio which played with taste, nuance, and humility, serving the songs by favoring interplay between musicians over flashy solos and fancy licks.

While her performance was great, the big name here was Gretchen Parlato: so big that even Costa let slip that she was thrilled at the idea of opening for her. As soon as she started playing, it was easy to understand why; Gretchen Parlato has incorporated the best elements of contemporary jazz and neo-soul and made them her own without getting submerged by them. Nowadays, jazz musicians know their Robert Glasper, and his odd time signatures and dreamy keyboard ambiances are found in the music of many a young jazz band — Berklee’s Youtube channel is a testament to that — but throwing in complex time signatures and sudden rhythm changes doesn’t always make for great music. Parlato manages to use all of these meaningfully in accessible song forms, while keeping complete control over her music and her band. She didn’t hesitate to correct the band’s tempo when they started the song too slowly. Thinking of herself as much as an instrumentalist as a vocalist, she used her hands as percussion and her voice as a melodic instruments, capable of blending in with the band or sticking out to drive the song. She treated us with beautiful, ethereal duos with James Francis on keyboards and Burniss Travis on the seven-string bass, and more driving songs where the audience was invited to sing along. And those were where you can really appreciate her mastery of her craft: she gets a sold-out room to sing along to complex jazz songs in odd meters with melodies so natural that people leave the room humming them.

Of course, it would be unfair to finish the review without talking about James Francis’s jazz piano and keys. A key testament to his skill is how he shined even while performing with an artist like Parlato. But that would not suffice, simply because he is so much more. His music was enough to set the blood flowing, and his music flowed with our blood; it was music that you enjoy with your whole existence. Francis could excite us with his solos or remind us of the pure feelings of a sunrise. When necessary, he could also let others take front and center. That is Francis’s power: his confidence and music flows freely no matter where he is.

On our way back from Isabella Gardner Museum, we found ourselves humming the melody from the last song. The final moments stayed with us long after the concert was over, like the spillover happiness from a beautiful dream that makes one happy for no apparent reason.