We'll walk this road together, through the storm / Whatever weather, cold or warm 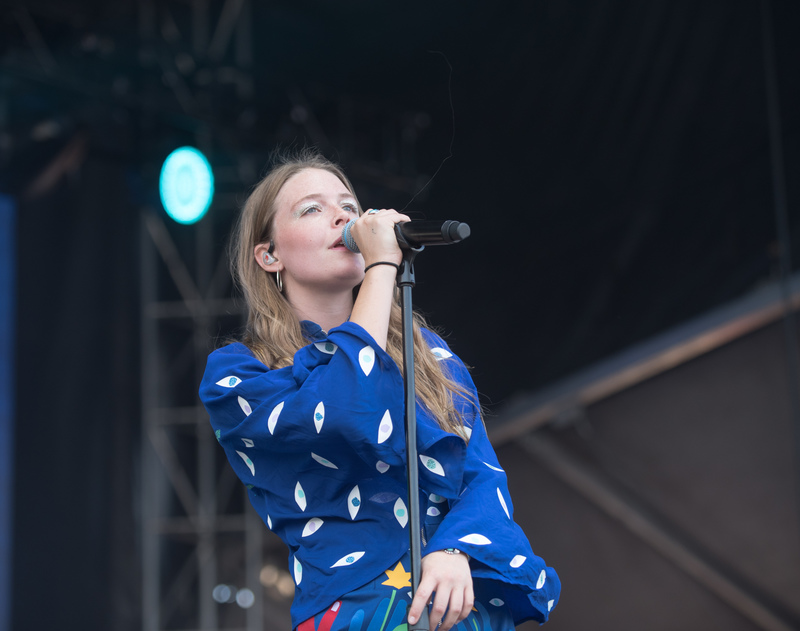 “You are our people,” a sign reads. Boston Calling invites Boston and Cambridge to join a weekend music celebration with incredible headliners each night and numerous performing artists throughout the day. Three stages (Blue, Red, Green), food vendors, a giant Ferris wheel, and an indoor entertainment arena opened up this year�s Boston Calling experience. Improved from last year are an increased number of food options, providing a more comprehensive experience of what Boston�s local businesses have to offer.

The setup upon entering the main part of the Athletic Complex was (from left to right): various audio company booths, food stands, a ferris wheel, the Red Stage, the main Green Stage, and more food stands. Over-21s would find alcohol easily available, with a Samuel Adams booth, drink stands of water, wine, and beer, and set up bars in tents.

Blue skies and warm weather on Friday ensured that Day One of 2018�s Boston Calling Music Festival was fantastic. Some highlights include Pussy Riot, The National, Citizen, and Portugal. The Man. Paramore�s Hayley Williams was a fantastic performer, wowing audiences as expected.

As we neared 9 p.m., the main stage began its setup, and a crowd formed in anticipation of Friday�s headliner, The Killers. In a surprise turn of events, Brandon Flowers performed the party-favorite �Mr. Brightside� in an exuberant fervor, starting the night off strong. Running through their 2000s hits such as �Human� (the enchanting chorus line, �Are we human? Or are we dancer?� was sung by the crowd). The sheer enthusiasm and grin that Flowers had during the performance made his love of performance clear.

The crowd�s fans sang along, keeping the energy up the rest of the performance, even after The Killers went through their top hits. Flowers even invited an audience member to play drums with them for one song as they performed, to the jealousy of numerous fans. When the song ended, the audience member took a selfie and embraced Flowers, which the audience greeted with applause and approval. With dramatic lighting, expressive projections on the back of the stage and confetti flying through the air, it was a fantastic end to a fantastic first day.

Alt rock dominated Day Two at Boston Calling, headlined by Jack White, and made amazing by St. Vincent and Tyler, the Creator. Listening to St. Vincent live is definitely a treat, but even better is watching her perform � she presented herself as a character almost out of a comic book or video game. Her backup vocalist, Toko Yasuda, shone in her own right. Tyler, the Creator brought his multi-flavored hip-hop to full enjoyment of the audience, and encouraged his fans to appreciate his art regardless of the flavor they prefer. The performance by Jack White was good as well, but the break-up of the White Stripes was felt dearly by the audience.

The beautiful weather did not hold out long. In typical Boston fashion, Day Three was sullied with rain, wind, and 55-degree weather. But this did not prevent hip hop and rap fans from coming out for that day�s indie bands and rap artists. I had the chance to see Taylor Bennett and Mike D, who both impressed me with their vastly different styles. While festival-goers lined up at Soundscape for free ponchos, artists were performing at different stages. Other highlights include Fleet Foxes and The Decemberists at the Blue Stage.

But in anticipation of the ever popular Eminem, the bustling sea of people swallowed me up as fans pushed through to be as close to the stage as possible. �We are Stan!� shouted a bunch of the more enthusiastic fans. In red trainers, Eminem leapt, strutted, and rapped across the stage as the cityscape projected behind him morphed, from sunsets to burning hell to city lights at night; the performance was a number of his hit songs flowing from one to the next. It was so effortlessly done that I was impressed by the repertoire, from Skylar Grey�s guest entrance for a third of the song �Stan� to other old hits such as �White America� and �The Way I Am.� Numerous classics from the early 2000s have kept him more than just afloat: they fuel the energy of his fans and closed off the weekend with one of the most energetic sing-alongs I�ve ever been a part of.

During the performance, to address the Nicki Minaj rumors, Eminem asked the crowd if they want him to date her. Cue the cheers. He then said, to the delight of the crowd, �Nicki, if you get this message, just text me later, we�ll talk about it.� Cue another eruption of cheers. The banter between Eminem and Mr. Porter was lighthearted and fun, and it was clear that, like The Killers and Jack White, all three headliners brought excitement back through the crowd.