The true price of chocolate 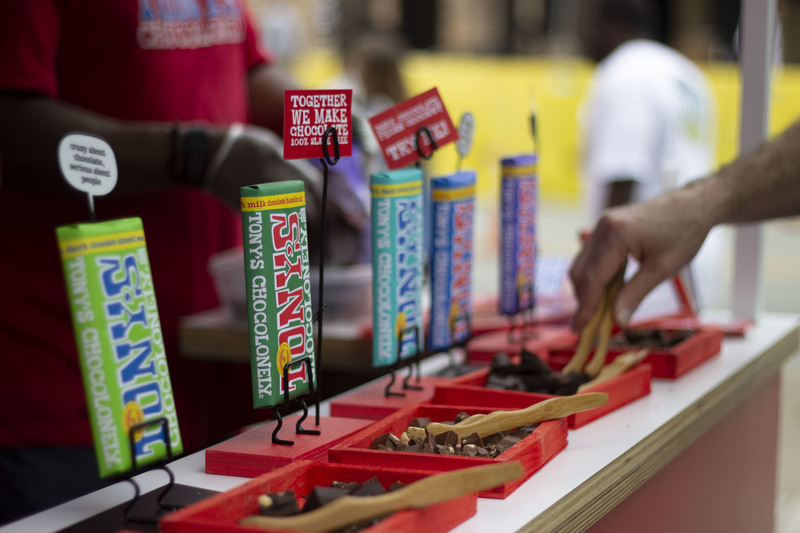 Have you ever thought about suing yourself? If you knew the story of Tony’s Chocolonely, you will know sometimes that’s necessary to make a point. We visited the Chocolonely Chocotruck to taste some chocolates, but what we got instead was a whirlwind tour of dark practices in something so seemingly wholesome that we rarely ever think twice about it: chocolate production and the use of slavery in it.

We visited the Chocotruck on a gray Thursday afternoon. We were disappointed in some sense because what met us there was less of a food truck and more of a pop-up exhibition. We got a chance to hear about how Tony’s Chocolonely came about: fifteen years ago, Dutch journalist Teun van de Keuken began investigating the unethical practices surrounding chocolate production in West Africa. After speaking to former child slaves, he decided to raise awareness about the issue by consuming chocolate, then turning himself in to authorities. The authorities refused to prosecute him, so he hired a lawyer and sued himself. In 2005, while waiting for the court decision, the first Tony’s Chocolonely bars were made. Eventually, the court judge decided not to prosecute van de Keuken, but Tony’s Chocolonely continued to sell fair trade chocolate around the world.

The chocolate bars don’t taste that different from off-the-shelf bars, but perhaps that is also part of the point. We got a chance to sample eight of their nine different bars; the flavors ranged from milk chocolate to dark milk pretzel toffee. The flavor was similar to that of Hershey’s. It was not overly sweet, but pleasant and smooth. Several bars had nuts embedded in them, offering a crispy crunch. The caramel sea salt milk chocolate was a standout, with a wonderful balance of intermingling flavors. One must wonder, with competitors offering similar products at a much cheaper price point (one 6.35 oz bar of Tony’s costs $5.50), if the feel-good origin story is enough to entice consumers.