It's a Bikini Bottom Day 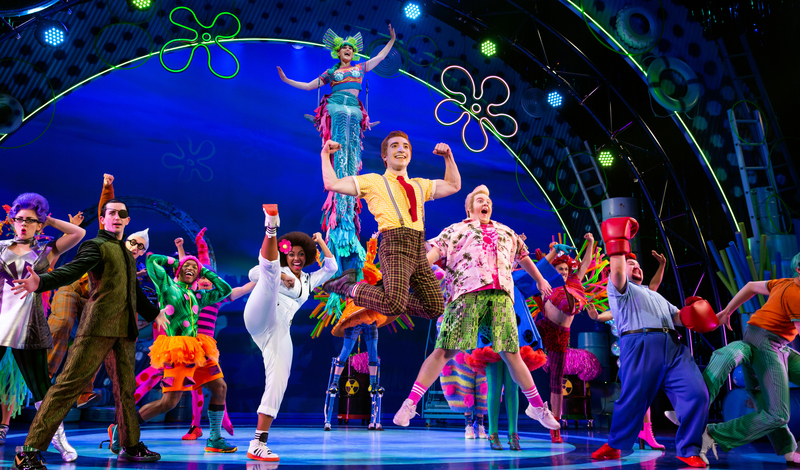 As I walked into the theater hall in the Boch Center to enjoy The SpongeBob Musical, the first thing to catch my eye was the contrast between the stage and the rest of the hall. In the early twentieth century buttressed theater, the technicolor stagecraft was like a fish out of water. The second surprise was probably the median age of the audience, a good twenty years lower than what I had expected. Both of these were misleading, as I found out. The musical itself was so immersive that, once it started, I barely had time to take stock of the theater. And while the majority of the audience was children, the musical wasn’t just light hearted banter; SpongeBob makes an effort to address some serious issues through music worth rocking out to.

SpongeBob’s greatest gem is the incredible score. The musical takes us through a whirlwind tour of different genres; pop-themed songs like ‘Bikini Bottom Day’ exists side by side with ‘No Control’ (rock) or ‘When The Going Gets Tough’ (hip-hop). Not only do the tunes get stuck in your head, but also the lyrics are enough to make you fall in love with the characters immediately. The individual songs carve out the outlines of each character well enough that, even with near-zero knowledge of them, I found them quite relatable. Although a star-studded list of songwriters and bands like Panic! At the Disco, T.I., Sarah Barellis, or John Legend seem certain to succeed in hindsight, Tom Kitt’s musical direction and orchestration definitely deserves credit for the incredible way he ties them all together.

As if to compete with Tom Kitt’s incredible music, Kyle Jarrow built a fantastic multi-layered story that is equally enjoyable for both the kids and the adults. The kids may be entertained by the characters’ sometimes reasonable, sometimes stupid, but always hilarious actions. But in my opinion, the greatest achievement of the musical is to thread together disparate themes like friendship, social hysteria, identity, and racism in such a cheerful, bright package, and address all of them with the gravity they demand. SpongeBob (Lorenzo Pugliese) and Patrick’s (Beau Bradshaw) friendship, their separation, and finally, their reunion was definitely an enjoyable plotline. How closely their friendship was tied to their identity, and how this tension was explored by Jarrow, was a great exhibit. At one point, the residents of Bikini Bottom decide to blame Sandy Cheeks (Daria Pilar Redus) for the coming disaster. The similarity with Sandy being the only land mammal and Redus being the most prominent black character in the cast was quite ironic. Similarly, it’s hard to think the portrayal of the sardines who follow a simple ‘savior’ whose solution to armageddon is closing his eyes wasn’t intentional.

Out of the cast, Lorenzo Pugliese shines the brightest as the titular character, which he plays with every bit of gusto it deserves. I was dubious given his inexperience in Broadway level productions, but that never seemed to matter even a bit. His companions, Bradshaw and Redus, also owned the stage in their character and the two-dimensional characters spring from TV to life. From the secondary characters, Christopher Cody Cooley as Squidward and Tristan McIntyre as Sheldon Plankton were the most memorable, both for their faithful portrayal of the characters, and the panache with which they did it.

Creating an undersea environment on a stage isn’t easy, but the stage directors made it so. The mesh of old-school techniques with projections on stage brought the cartoon world of Bikini Bottom to life that day in Boston. Similarly, walking into the theater I knew the characters wouldn’t look the same as the cartoon, but the uncanny impression made by Squidward’s double legs was indeed quite impressive.

SpongeBob never takes itself seriously, but the number of serious messages it manages to pass to the audience is admirable. It serves as simple entertainment, an uplifting message, and a clever expos’ of some of our social problems, all at the same time. The show itself almost reflects one of the ballads, ‘Not a Simple Sponge’; both SpongeBob and his eponymous musical are much more than that.